The stone building in which the traditional Morfeas guest house is currently situated was built in 1863 by Polychronis Katsanikas, who had worked in Romania, returned and invested his money in Papigo from where he originated.

This mansion house, later on, passed into the hands of his son, Manthos Katsanikas, who was married to Aikaterini Katsanika. Aikaterini was awarded the “Cleanliness and Hospitality Prize”  by the Greek Tourism Organization, during the period in which mandatory provision of rooms to the first tourists of the season, with a corresponding rent, was imposed by law on those who kept mansions in Papigo.

At the time the family rented out two double rooms, the “Matzato” on the ground floor and the “Ontopoulo” upstairs. Manthos Katsanikas, in turn, gave his home to his beloved daughter, Sofia Thoma Katsanika, because she always stayed with him and cared for him even though married and having created her own family. His daughter, had the name of his sister Sophia who had been taken by the rebels and died of starvation in the mountains of Albania because she refused to eat their dirty food out of their dirty cauldrons. This soft spot that he had for his daughter was also because of the fact that she looked very much like her mother (his wife) whom he loved very much and had lost young, just 54 years old.

Manthos Katsanikas fought in Asia Minor war when he was 18 years old as Tsolias and reached Eschis Sheikhr from where he returned to his home country with very few of his co-operatives. Aikaterini Katsanica, his wife, was a Communist and for that she was pursued. Due to his great love for her, he was constantly making up places to hide her in the house, in hatches, in the barn and in the cellar so that they could not find her. 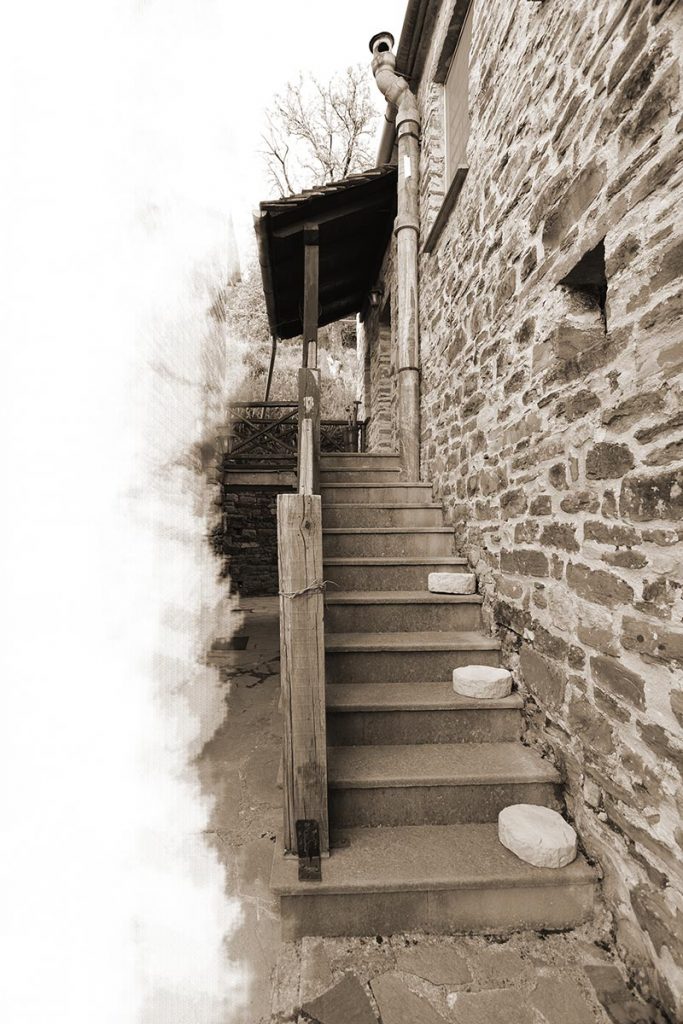 Morfeas was created in 2007 with the renovation of the old mansion and the creation of a new building next to where the stable used to be. Morfeas Guesthouse consists of: the “Salon”, the reception hall located at the entrance of Morfeas under the internal staircase. It was connected to the cellar which was used for storage of their food because of its low temperature, as there were no refrigerators at time. It was called “bimtsa”. Today it has become the breakfast room. The “Mantzato”, which has become a double bedroom with a fireplace, is the room in which they used to welcome their holiday guests and was later rented out to tourists according to GNTO laws. Climbing the staircase, which is half made of stone and half of wood and is also used to separate different house areas, we find the “Krevata”, the upper hall of the house with the “Messandra”, a closet above the staircase that was used for storage of wool, flocks and more.

The “Krevata” is connected with “Ontopoulo”, a small room with a fireplace (common in all rooms) and a bed where the housekeeper would sleep. Next to that was “Bassia”, a big room where the family slept during the winter months so the bases were big enough to fit everyone by the fireplace. In today’s five-bed room which was created by “Bassia” and “Ontopoulos” joined together, there was a door that led to the outdoor kitchen of the house with the stone-built oven that is still preserved and accommodates the double room “Manthos”. In the adjoining building, now home to the owners, there was the outside kitchenette and the toilet as well as the stable. After the renovation the upper floor hosting the 2 quadruple rooms was created. Behind the building is our orchard, the old gardens that are still preserved today, in which we grow our organic products that we offer in our breakfast every morning.

In the stone-built breakfast room, we choose to serve mostly our organic produce such as homemade, traditional jams, pastry pies and local cheese pies, honey and eggs from local producers as well as fresh seasonal fruits. 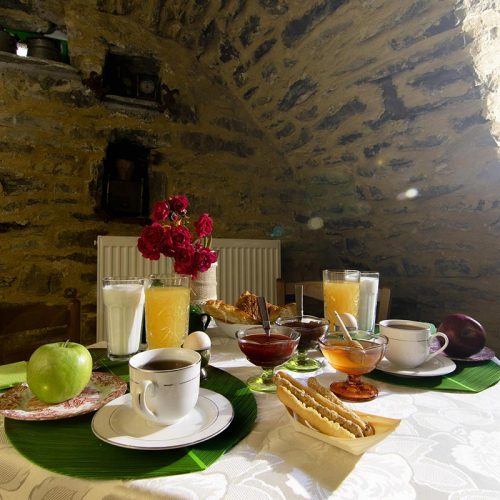